Activities in the production of Cellulose Nanomaterials (CN) have continued to accelerate since our last update in Summer, 2018. To help track this progress the Nano Division has teamed up with Jack Miller of Biobased Markets to summarize the state of the industry. Information presented here is extracted from reports produced by Jack Miller and updated with input from producers. Periodic updates will be made to this website so that the information remains current. 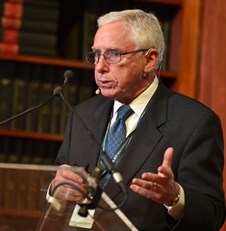 Jack Miller is Principal Consultant, Market-Intell LLC, which he founded in 2005 and re-branded as

Biobased Markets in 2018. Jack is also an Associate Consultant with RISI and a member of the Advisory

Board of Sweetwater Energy, a biorefinery company. Jack served as Business Development Consultant

with CelluForce, Inc., from 2011 to 2013, and was Consulting Manager, Global Nanocellulose Sales,

Jack is the author of:

It is well known that the distinction between microfibrillated cellulose or cellulose microfibrils (MFC), and nanofibrillated cellulose or cellulose nanofibrils (CNF) is not clear cut. As reported in the previous Production Summary, some materials called CNF are primarily micro-scale while some called MFC are primarily nano-scale, and some are a mix of nano- and micro-scale particles (Figure 1). Accordingly, some producers have suggested the term “cellulose fibrils” rather than CNF or MFC. This point is well taken, but in this Summary, we use the terminology the producer uses. If nano or micro are not specified, the material is included under MFC.

It has also become apparent that the difference between CNF and CNC (cellulose nanocrystals) is not clearly defined. CNC was originally produced primarily from bleached pulp by means of sulfuric acid hydrolysis, which essentially separates the crystalline portion of cellulose from the non-crystalline or amorphous portion. CNF was produced by primarily mechanical means, in some cases with enzymatic or chemical pretreatment to reduce energy cost. CNF and CNC were very different, and the difference was quite clear.

Now, however, biorefinery processes have emerged that produce CNF or CNC from biomass. GranBio (American Process) uses sulfur dioxide and ethanol (AVAP® Process) to fractionate biomass into lignin, hemicellulose and cellulose, and can produce either CNC or CNF, or a blend of the two.[i] More recently, Sweetwater Energy introduced its SunburstTM reactive extrusion process which also fractionates biomass into lignin, hemicellulose and cellulose, and with further enzymatic hydrolysis can yield CNC or CNF.[ii] CNC and CNF cannot be definitively distinguished by particle size, crystallinity, or other metrics, though cellulose nanofibrils tend to be longer, and may be entangled, while nanocrystals tend to be more crystalline and can be presented as discrete particles.

A more detailed discussion is beyond the scope here, but we can report that ISO, with support from TAPPI, is working to develop standards for the measurement of cellulose nanomaterial particle size. 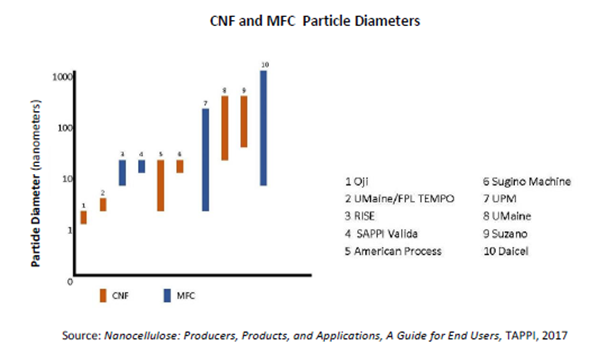 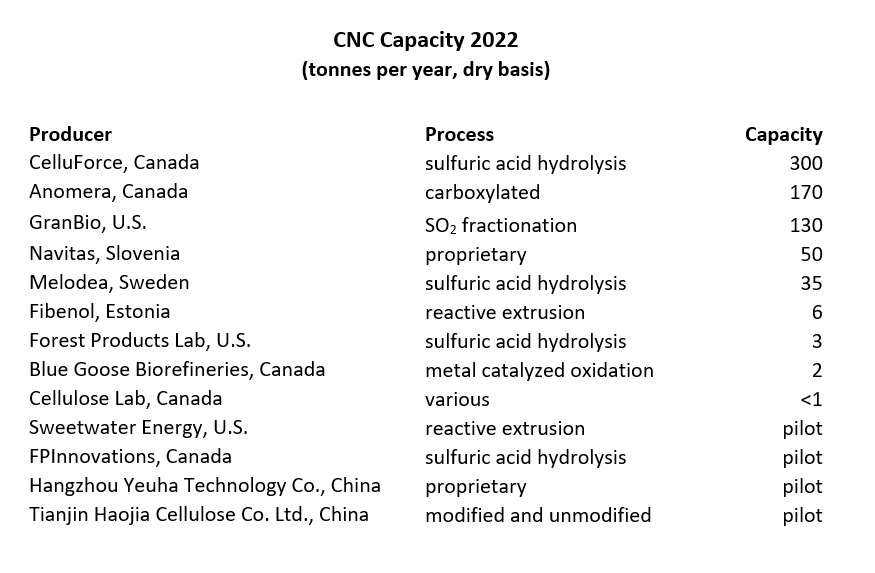 In July 2022, Anomera, Inc. began production at its 170 tpy carboxylated CNC facility in Canada. Anomera advises that they have the capability to ramp up production to meet demand. In November 2020, Anomera and Croda International announced a collaboration to develop high quality carboxylated CNC for the cosmetics and personal care markets. Croda is the exclusive supplier of Anomera’s materials in the personal care market.

In September 2020, CelluForce announced a ten-year commercial agreement granting global exclusivity to a multinational company in the cosmetics sector.

In March 2022, Fibenol OÜ and Sweetwater Energy announced that Sweetwater has received final acceptance of its first commercial Sunburst unit at the Sweetwoods Project in Tallinn, Estonia. Fibenol can produce nanocellulosic material from biomass, with different amounts of lignin and hemicellulose content. Crystallinity is in the range of CNC; shear viscosity is in between that of CNF and CNC. Fibenol reports that their CNC is a hybrid between CNC and CNF.

Navitas d.o.o advises that production of Nanocrystacell CNC started up in 2020 in Slovenia following development beginning in 2018.  Capacity is 10 tonnes per year, and the glycol-based process results in CNC with negligible sulfur content. 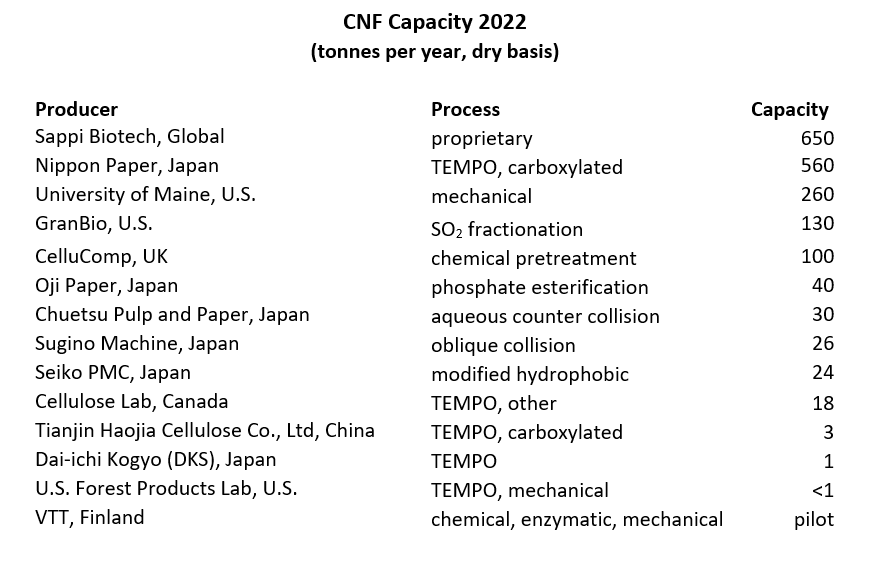 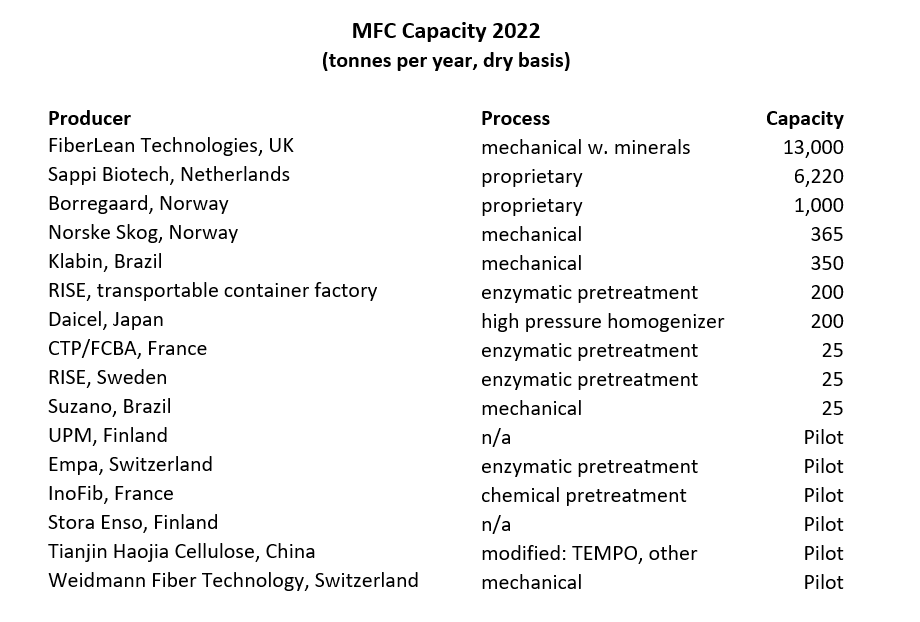 Sappi reports that as of Q1 2023, Valida CNF is available in larger volumes as production capacity has expanded beyond the pilot plant in the Netherlands. In 2020 Sappi launched its diverse Valida natural cellulose products for a wide range of applications including personal care, coatings, construction additives and packaging.

In 2021 Werhahn KG acquired FiberLean Technologies. Total FiberLean MFC industrial capacity is estimated at 13,000 tonnes per year, including plants in the U.S., India, and France and a pilot plant at Cornwall, UK. Recent highlights include; (i) the development of three MFC product lines; virgin-fibre based MFC products without minerals, recycled fibre based MFC products, and mineral MFC composite products; (ii) high solids merchant product forms to complement existing on-site satellite manufacturing;  (iii) improved ability to tailor products to get the best performance from all chemical pulp types; (iv) Increased regulatory clearances which now include BfR, Netherlands, FDA, Canada and China; and (v) an increased range of applications both within and beyond paper and board.

Valmet reports that it now has seven installations globally for its disc refiner MFC technology. Total capacity is 19 tpd, including plants in Europe, South America., U.S., and Oceania. An eighth plant is expected to start up in 2023 with capacity for 60 tpd.

Norske Skog installed their MFC pilot plant at Saugbrugs in 2017 with an announced capacity of 365 tonnes of CEBINATM MFC. Recently they have reported progress in areas of water-based paint. In 2022 the application of MFC in solvent free epoxy spray was announced and the company has supplied material to three industry-scale projects in onshore fish farming, drinking water treatment and storage. Testing in fibre and particle boards have also been reported.

It is estimated that more than 75% of all cellulose nanomaterial (including MFC) is produced on site at mills and used in their own paper and paperboard production.  This would include the Valmet and FiberLean technologies, plus several reported here and many others not reported.

Cellulose filaments were developed by FPInnovations and were first commercialized by Kruger Inc. under the brand name FiloCellTM.

In February, 2020 Performance BioFilaments, a 50/50 joint venture between Mercer International, Inc. and Resolute Forest Products announced the availability of high-performance CNF beginning in 2021 with a 21 tpd plant at Resolute’s Kénogami paper mill in Quebec, Canada.[ii]

Tianjin Haojia Cellulose Co., Ltd., established in July 2013, is also reported to be producing cellulose filaments in the Tianjin Key Laboratory of Pulp and Paper, Tianjin University of Science & Technology.